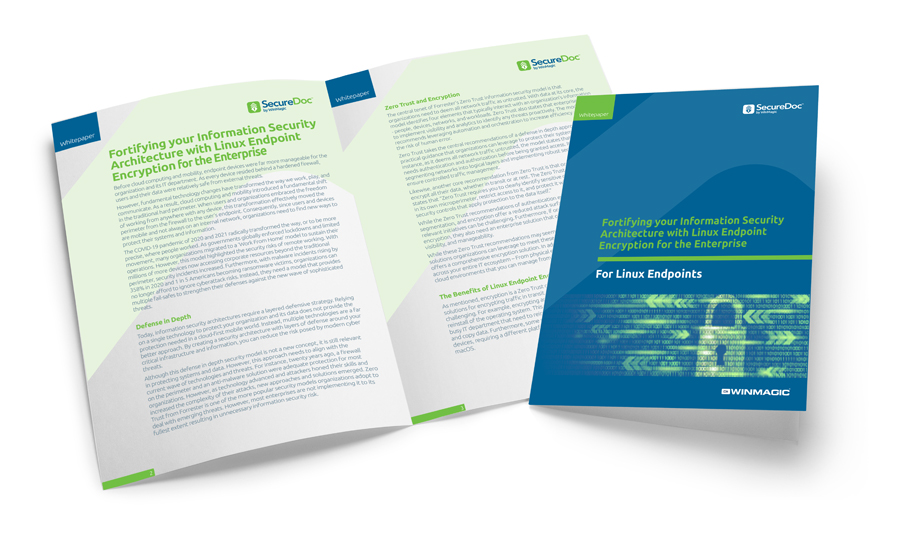 Sign up and get our
free whitepaper. Please complete all fields.

SecureDoc for Linux for laptops, desktops and workstations builds on the capabilities available in Linux by adding manageability to support enterprise capability

Linux has built-in encryption for endpoints for several years now. Yet, many enterprises struggle with encryption on Linux endpoints. Our SecureDoc Linux solution builds on the capabilities available in Linux (such as dm-crypt), providing an overarching layer of manageability, visibility, and automation that scales at an enterprise level and facilitates compliance.

Linux is growing both on Servers and as a secure and robust desktop and software development platform. Linux users and their devices are mobile and not always on an internal network, o there is a need to find additional ways to protect their systems and information, wherever it is located.

While Linux endpoints are often seen as more secure than their Windows counterparts (partially due to the fact that malware and other related cyberattacks target Windows which offers a much larger target base) recent events have uncovered several flaws in Linux as attackers shift their focus to this operating system.

Work from home was a limited reality for some businesses, but the COVID-19 pandemic of 2020 and 2021 radically transformed where people worked. As governments and industry globally enforced lockdowns and limited staff movement, many organizations recognized the most (or only) viable solution was a ‘Work From Home’ model - if they hoped to sustain their operations while waiting for the Covid threat to be brought under control.

With malware incidents on the rise by 358% in 2020, and 1 in 5 Americans touched with ransomware attacks according to a Harris poll, organizations can no longer afford to ignore cyberattack risks – on any device platform.  Instead, they need a model that provides multiple fail-safes to strengthen their defenses against the new wave of sophisticated threats.

This necessity brought into sharp detail the security risks of remote working. With millions of more devices now accessing corporate resources from outside the traditional perimeter, security incidents increased. The security perimeter changed from the corporate firewall to the user’s endpoint located at home.

Organizations need to protect Linux endpoints with identical, robust security mechanisms they use for other device types - a defense-in-depth security strategy. The Zero Trust model takes defense in depth even further, and endpoint encryption meets its requirements, providing the last line of defense against any system compromise. Should a user’s device be lost or stolen, the data on the device remains secure, protecting the organization and its data. In addition to protecting from sophisticated cyberattacks, encryption also meets the requirements of many compliance standards such as PCI-DSS and provides organizations with the surety that their information remains confidential and its integrity indisputable.

SecureDoc works seamlessly with Linux native encryption. By providing a management layer on top of dm-crypt, the built-in drive encryption solution that comes with the Linux operating system, it improves enterprise manageability.

By leveraging the features offered by WinMagic’s SecureDoc for Linux, organizations can implement a Zero Trust, defense-in-depth strategy that fortifies their information security architecture for Linux endpoints.

While Linux’s encryption toolkit is the best at encrypting Linux-based devices, the operating system can really benefit from an encryption management solution like WinMagic SecureDoc Enterprise Server, to manage and unify encryption efforts across the enterprise and across device platforms.

Without an encryption management platform like SecureDoc, native Linux encryption of an endpoint’s storage device typically requires a reinstall of the operating system – resulting in unproductive users and a busy IT department reinstalling the operating system, configuring all the applications, and copying data back into the now-encrypted disks.

– because the expertise to deliver these two components is quite different. In the case of Linux, SecureDoc works seamlessly with the native encryption, layering on top of dm-crypt to better manage device encryption.
SecureDoc for Linux takes Linux encryption management to the next level. The distinct endpoint license:
Makes central deployments and user staging simple for Linux devices
Permits initial live conversion of disks - allowing admins and users to log-in and work on the machine while initial encryption occurs
Removes the need to clear the disk and re-install the operating system before commencing encryption